The QUEEN'S VOW, A Novel of Isabella of Castile by C.W. Gortner - HISTORICAL FICTION NOVEL REVIEW

C.W. Gortner's The Queen's Vow - A Novel of Isabella of Castile opens with a quote from Isabella I of Castile:

"I have come to this land and I certainly do not intend to leave it to flee or shirk my work; nor shall I give such glory to my enemies or such pain to my subjects."

It is a most appropriate quote for Gortner's depiction of Isabella.  Isabella's father died when she was 3 years old and she, her younger brother, Alfonso, her mother (Juan II's second wife) and a small entourage were swiftly whisked away within hours to Arevalo in Avila by the Archbishop Carrillo of Toledo to live in penury for a decade.

Their removal was necessary as Juan II had sired a son, Enrique, during his first marriage who would claim the throne of Castile.  Alfonso was Enrique's heir at law until Enrique himself produced a child.  Sanctuary was necessary to protect the children of Juan II's reviled second wife from separation from their mother.

During their exile, the children experienced a certain amount of freedom, but their mother suffered many "spells".  Isabella was especially adroit at calming her mother.  Recalled to Court by Enrique, Isabella and Alfonso depart for Segovia.

Enrique proves to be a weak ruler, as was his father, and is controlled by the nobles.  His queen, Juana, has just borne a girl child, although there is no affection evident between the couple.  In fact, the parentage of the child is questioned, leaving open the option of Alfonso as heir to Castile.

Thus begins Isabella's dance of words and actions to appease Enrique and demonstrate her innocence; a waltz destined to continue until she became Queen of Castile.  During this time she fends off several marriage betrothals and secretly marries Fernando of Aragon. 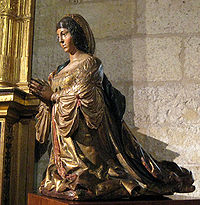 Isabella was an extremely devote Catholic.  Much of her reign is marred by wars and controversial actions, which were likely influenced by religious beliefs standard in the 16th century.  Gortner portrays a woman who abhors violence but, with the Church's collusion and her own strict convictions, nonetheless acts in what she believes to be the best interests of her people and their eternal souls.

Yet, Isabella was a visionary and worked tirelessly towards goverance reformation, crime reduction, restoration of Church properties, furtherance of education (especially for women), replenishment of a bankrupt treasury and funded Columbus's explorations.

Gortner does not attempt to persuade the reader to either agree or disagree with Isabella's decisions, but presents more of an unbiased portrait, without embellishment of her finer points or effacement of her warts.  The Queen's Vow is simply an effort to illustrate, not interpret, this complex woman who forged the nation of Spain.

Gortner is successful in remaining faithful to the social mores and values of the day without permitting those of today to creep into his accounting.  And, that, is what historical fiction is about: a view into the past.

C.W. Gortner - in my books (pun intended) - has joined the ranks of today's preeminent historical fiction authors.  The Queen's Vow is testimony to the quality and substance of his novels.