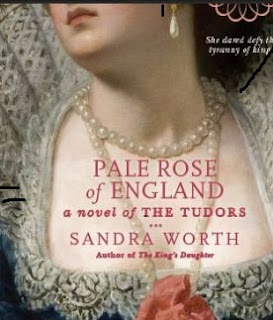 Published 2011, Penguin Group, ISBN 978-0-425-23877-6, 430 pages
"It is the man, and not the king, I love".  These are the only recorded words of Lady Catherine Gordon and, upon which statement, Sandra Worth composed her latest historical fiction novel, Pale Rose of England.

Aside from her marriages, King Henry VII's consuming passion for her and the locations of her manor home and burial place at St. Nicholas Church, history tells us virtually nothing of a woman who passionately loved and wholeheartedly believed her first husband was Richard Plantagenet, Duke of York, one of the "lost" princes in the Tower of London.

Richard, Duke of York, was known most famously by the name of Perkin Warbeck or The Pretender to the 15th century world.  He met Catherine Gordon in Scotland and they married for love (and political reasons) soon after.

Sandra Worth created a woman who naively believed Richard could remove the usurper, Henry VII, and rightfully assume the throne of England and rule with grace and compassion.  As we all know, this did not happen.

Rather, her husband was taken prisoner and her infant son pulled out of her arms and never returned to her.  Thus, Henry VII removed threats to his throne.

Sandra Worth's Pale Rose of England, Catherine Gordon, is portrayed as a woman with incredible loyalty, courage and convictions.  She rebuffed Henry VII's attempt to woo her and, upon her husband's death, his marriage proposal.  She suffered great torment on behalf of her husband and her only kidnapped child.  She wore black for the rest of her life after her husband and child were lost to her.

Catherine was an intelligent woman who carefully assessed situations to determine the best cause of actions.  She was the reason I was drawn to read this historical novel (well, that plus the fact Sandra Worth is the author).  I had never heard about Catherine before and I was intrigued to read about a historical figure novelists largely ignore.  Of course, much of Worth's characterization is conjecture owing to the lack of information on Catherine Gordon.

Pale Rose of England presents plausible arguments that Perkin Warbeck was actually Richard Plantagenet.  In her Author's Note, Sandra Worth sets out facts and research resources on which she relied for the plot of Pale Rose of England.

We'll likely never know whether Perkin Warbeck was actually Richard Plantagenet, but Sandra Worth left me considering the possibility. I'll leave it to you as to whether Sandra Worth convinces you.

Members of the Richard III Society are most likely are pleased by this novel.  Richard III has been vilified by history as the perpetrator of the deaths of the lost Princes.  If you are interested in reading more about Richard III, the lost Princes and the War of the Roses http://www.richardiii.net/ is an excellent resource.