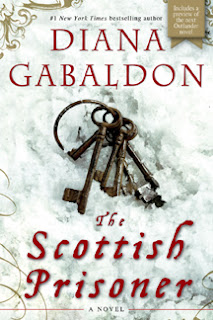 Published 2011, Doubleday (a Division of Random House), ISBN 978-0-385-66098-3, 507 pages
Diana Gabaldon's latest entry in the Lord John Grey series is The Scottish Prisoner, in which the dreamiest man in historical fiction, Jamie Fraser, features predominantly.  I've read a few of the previous Lord John Grey novels, but I find Grey just doesn't grab my interest as a sole protagonist.  His role in the Outlander series as an incilliary figure suits his character much better.
That said, I purchased The Scottish Prisoner because Jamie Fraser is a major player.  Gabaldon, over the years, has fleshed out an intricate thee-dimensenal Fraser, whereas Grey does not have the same depth.
In The Scottish Prisoner (if you have read Voyager in the Outlander series, you will be able to follow the time-line), Jamie Fraser is a paroled prisoner of war after the disastrous battle at Culloden and internment at Artsmuir Prison.  Grey is the officer in charge of his parole.
He labors in the stables of  remote Helwater, domain of Lord Dunsany, and keeps his head low.  He is tormented by the absence of Claire and fears for her safety and that of their child.  It has been 14 years since Claire returned through the stones.
His illegitimate son, William, by the Lord's daughter, Geneva, is his secret delight.  His son is officially acknowledged as the off-spring of Geneva's late husband, but there are a few who know the truth.
﻿One day Fraser receives a message to meet an Irishman in an isolated place and, to his dismay, it is Tobias Quinn, a former upriser for the cause of Charles Stuart.  Fraser is determined to have nothing to do with any of Quinn's plans or the man himself.  His repudiation of Quinn is of no avail, however, as Quinn is intent on acquiring Fraser's involvement in the Cause's plots.  The man's "pernicious influence" surfaces throughout the novel.
Meanwhile, back in London, Grey has received a packet of damning documents, written by a former lover on his deathbed who was a soldier under the command of one Major Gerald Siverly alleging corruption.  Grey turns the packet over to his brother, Harold, Duke of Purdloe.  Amongst the packet is a poem written in the ancient Irish language, Erse.
Grey retrieves an unwilling Fraser from Helway in the hopes he can translate the poem and unlock its mysteries.  Fraser is able to understand the majority of the poem but, provides a translation without including a pertinent detail, to Grey and the Duke. Fraser purposely holds back this detail as it involves plots he wants no part of.
The Duke dispatches Grey and Fraser to Ireland to bring Silverly back to answer for his crimes.  The trip to Ireland is fraught with dangers, old enemies, murder and the ever-purposeful Quinn.  Unexpectedly, for both Fraser and Grey, developments in their view of each other slowly evolve.
Gabaldon, as is her speciality, packs her main plot with subplots and conundrums.  It is remarkably easy to lose oneself in this book and keep reading long after the light should be turned off.
The language in this historical fiction novel is grittier than Gabaldon normally uses, however, as it is written in a man's world, it is not inappropriate.
I enjoyed this book as much as I relish diving into the latest Outlander novel ("Written in My Heart's Own Blood" due out in 2013).
While cruising Gabaldon's website, I came across an interesting tibit.  Apparently, a musical stage production based on the Outlander series is in the process of being developed in the UK.  A CD containing original 14 original songs that will be incorporated into the production is available.  For more information, go to http://www.outlanderthemusical.com/.
One more note:  if you've read the graphic novel "The Exile", do your best to get the depiction of Jamie Fraser out of your mind and revert to your imagination!  Personally, I felt the image of Fraser came nowhere close to my fantasy.
RATING:  **** (Excellent)
Posted by Darlene E Williams at 12:34 PM