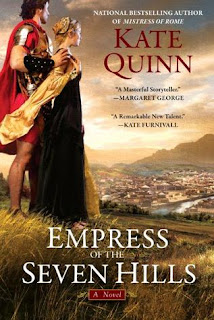 After reading Kate Quinn's first historical fiction novel release, Mistress of Rome, Empress of the Seven Hills is the kind of follow up novel I expected.

Empress of the Seven Hills continues the story of Vix and Sabina.  Vix is an all or nothing kind of guy:

"If I'd known the trouble that small-breasted off-limits patrician girl would make for me, I might have choked her to death in the middle of that atrium rather than watch her walk away.";

whereas Sabina is more apt to calculatingly plan her life to gratify her own desires:

"It's time I married, and Hadrian will do as well as anyone. Better even.  He wants to travel, Vix. He says he'll take me to Athens after the wedding, and Thebes, and maybe Egypt. Everywhere."

Vix is the son of Arius the Barbarian.  He has grown from a passionate, unmannered young boy in Mistress of Rome into, well, a passionate unmannered 18 year old who returns to Rome, his center of the world, to seek his fortune and titles himself the "Young Barbarian".

At 13 years old, an astrologer foretold Vix he would lead a legion one day.  Vix is horrified upon learning 25 years of servitude is required for legionaries.  So, he tries his hand at thieving and bodyguarding for Sabina's father first until an encounter with Emperor Trajan causes him to reconsider his options.  That, and the fact Sabina is set on marrying Hadrian and ending their affair.

Vix's admiration for Emperor Trajan develops such that he would perish for Trajan before he would die for his wife and children.  He loves the Emperor unreservedly until Trajan's death in 117 AD.

Sabina extensive travels brings into contact with Vix many years down the road where Vix is stationed as a legionary. Once again, Vix learns the hard way Sabina will follow her own path.

The majority of Empress of the Seven Hills is set during Trajan's lifetime.  It commences in 102 AD. 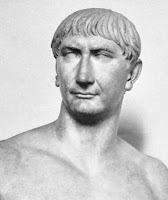 Trajan was a capable administrator and military campaigner.  He set up programs to assist poor children in Italy, ensuring they had food and an education.  He improved the infrastructure of Rome with many building projects, road systems and the last aqueduct constructed under the Roman Empire.

Dacia was the first of Trajan's military campaigns and, perhaps, the greatest of all.  Vix, as a legionary, is part of this campaign and spends many years involved in the quest to conquer Dacia.

Respecting homosexuality, "To be an ancient Roman male in good standing meant you initiated penetrating acts of sex. Whether you did this with a female or a male, slave or free, wife or prostitute, made little difference -- as long as you were not on the receiving end, so to speak. [See Catullus XVI.] Certain people were off-limits, though, and among them were free youths." (source:  http://ancienthistory.about.com/cs/sexuality/a/aa011400a.html)

With regard to infidelity, "In a Roman household sex was in plentiful supply. Except, so it seems, between the actual married couples. The existence of slaves in the house naturally mean that, particularly the men, but also the women (although with the risk of pregnancy and disgrace), had access to sex whenever they so required.

To a Roman sex did not create any kind of bond between two people. It created no obligation between one side and the other.

As far as the law was concerned then sex with slaves was not adulterous. Or at least not for men. And sex with a free-born man or woman was only adultery if they were not doing it for money. Thus, sex with a prostitute did not constitute adultery.... However, adultery with a free-born was a crime, stuprum. And for this there was only one punishment; death.  So as long as one steered clear of committing stuprum, anything was allowed. There was no limits on age and also none on gender." (source:  http://www.roman-empire.net/society/soc-household.html)

My research on these particular aspects of ancient Rome culture satisfied me Quinn was not gratuitous in focusing on homosexuality or infidelity.

Empress of the Seven Hills is packed with action, schemes, betrayals and unwavering loyalties. Quinn presents well-rounded characters you can love to love or love to hate. Even if you are knowledgeable about the succession of Roman Emperors, it doesn't detract from the plot. The characters are compelling with their attributes and deficiencies.

Empress of the Seven Hills is available for purchase in paperback or Kindle on Amazon.  Click here.

Posted by Darlene E Williams at 11:57 AM