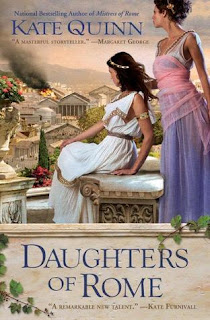 Opening the first page of Daughters of Rome, I expected to story to begin with Vix, the character Kate Quinn promised would be the focus in the future.  I was somewhat disconcerted, however, to find we had gone back in time, A.D. 58 to be exact, in the first chapter.

Wondering if I had somehow read the series out of order, I checked the publication dates and with Kate Quinn whether I had done so.  No, apparently I had not.

The pace of Daughters of Rome was somewhat more sedate, even though it is set during the time known as "The Year of the Four Emperors".

In 69 A.D., after Nero's death, Servius Sulpicius Galba, beat 4 other contenders to Rome and declared himself Emperor.

He made two fatal errors:  he didn't pay his soldiers and chose a heir other than Marcus Salvius Otho, his closest supporter.  He lasted 7 months before he was killed in the streets by Otho's soldiers.

Otho proclaimed himself Emperor and, should you be unlucky enough to be Galba's soldier or supporter, Otho ensured you met a quick death.  This, however, didn't prevent a revolt in Germania by Vitellius.  After a battlefield defeat to Vitelluis's troops, Otho committed suicide.  He was Emperor for 95 days.

Vitellius was a reluctant Emperor for 7 months.  He lived the decadent life until he heard Vespasian and his troops were heading for Rome.  His pleas to the Senate that he be allowed to abdicate were met with horror.  Romans did not plead for mercy, they faced the music.  And that he did, kicking and screaming the whole way.  Vespasian's troops tortured him to death.   As an aside, I was unable to find an image of Vitellius that wasn't obviously a caricature.

Enter Aelius Vespasian.  For almost the next three decades, he and his sons restored stability and peace to the Roman Empire.  This period was known as the Flavian dynasty.

In keeping with the theme of "four", Daughters of Rome focuses on four Cornelii women during this violent and turbulent period:

Cornelia - who has groomed herself and her husband, Piso, for the positions of Empress and Emperor of Rome.  All is well until he perishes with Galba.  Stricken with grief, Cornelia isolates herself from her family and society until one day she comes to a realization....

Marcella - an scheming woman behind a mask who comprehends she can influence history, but wants no part of the consequences.  Marcella never dreams of how her name will be written in the annuals....

Lollia - her grandfather's pawn in the game of marriages.  Lollia has more husbands and divorces than you can count on one hand by the time she is 19 years old.  She endures but, secretly, there is one man she loves.  A man she can never have....

Diana - every man is crazed for Diana, but Diana only has eyes for horses.  There might be one man who could change her focus, but does he...

Daughters of Rome did not grab me the same way Mistress of Rome did.  It was an enjoyable read and there was plenty of conflict and action but, somehow, I felt out of place.  I honestly think it's because of the order in which the novels were written.   So, my recommendation, if you haven't read Mistress of Rome yet, is to read the novels in this sequence:


RATING:  3 Stars *** (Good)
Daughters of Rome is available for purchase in paperback or Kindle on Amazon.  Click here.