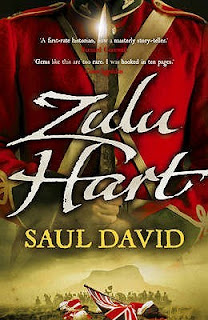 Zulu Hart (George Hart #1) by Saud David is the story of George Hart, bullied for his dark skin and unkknown father.  Hart learns to defend himself and masters fighting skills.  His expertise will lead him to South Africa at a time when racism is rampant in England.

England and Zulus are headed for war - on whose side will Hart fight?  His ancestral country or the country in which he was raised.