A-Z April Blogging Challenge - Y - YEAR OF THE HYDENAS: A Novel of Murder in Ancient Eygpt (Semerket #1) by Brad Geagley 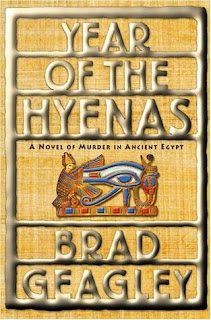 Year of the Hyenas:  A Novel of Murder in Ancient Egypt (Semerket #1) by Brad Geagley is the first in a series set during the reign of Rames III.

The protagonist, Semerket, is a Clerk of Investigations and Secrets, with a drinking problem and a tendency towards irreverent behavior to those in power.  An elderly Theban priestess is murdered and Semerket is hired to solve the case, which is considered a insignificant murder at best.

However, Semerket discovers it is a less than significant murder and is soon embroiled in a conspiracy against the life of Ramses.   Unknownst to him, his ex-wife, whom he still loves passionately, is in the clutches of the conspirators.

Semerket has to choose between the salvation of Egypt or his ex-wife.  What will he do....

Posted by Darlene E Williams at 7:54 AM