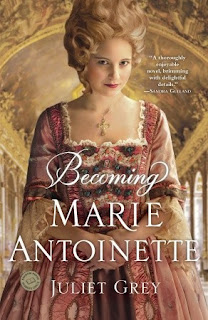 Much of this novel is taken up with Marie's childhood life and subsequent grooming, mentally and physically, by her domineering mother, Empress of Austria, who desires an alliance with France to protect her own domains.

Marie, according to her mother, was lacking in intelligence, grace, education, elocution and, perhaps, most importantly, a bosom.  Several accomplished instructors to attempt to improve Marie.  They were not successful in many areas, such as reading and writing, but, after enduring braces (you can imagine how painful that was in the 18th century), dancing lessons, poise control and endless education sessions, Marie was considered almost acceptable for a momentous alliance with France.

There are two points Grey makes in this historical novel that jarred me:  1) the Virgin Mary, Mother of Jesus, never wed (correct me if I'm wrong in believing Mary and Joseph did marry) and 2) the infamous "let them eat cake" statement (commonly wrongfully attributed to Marie Antoinette) by Marie-Therese, the wife of Louis XIV (disputed by many modern scholars as a myth).   I could be prejudiced by modern day knowledge as regards point 2 and it was taken as truth during Marie's lifetime, but I still have trouble with point 1.

The one defect the Empress had no control over was Marie's "flowering"; she was a late bloomer.  However, at long last, the happy moment arrived even if her bosom did not increase substantially.  At age 14, after long years of tenterhooks negotiations between her mother and the Dauphin's grandfather, Marie arrived in France.

This is where the novel started to drag for me.  The latter portion of the novel is set during Marie's first 3 years in France.  Unused to the liberal French court in comparison to the Austrian court and with no companions her age, Marie had a huge adjustment to make.  She never was able to reconcile herself to Madame du Barry, the King's mistress, feeling the relationship morally untenable.

Becoming Marie Antoinette hereon in contained far too much repetitive material, such as her daily visits with the King's spinster sisters.  I lost incentive to keep turning pages and my light on at night.  Just as dragging was the Dauphin's inability or lack of desire to consummate the marriage, even though this is accurate and would have caused much consternation in the day.  Marie's days at Versailles indulging in backbiting and gossip to entertain herself could have received less coverage as well.

A disconcerting feature in this section of the novel was correspondence between various nobility and the Empress regarding Marie's behavior.  These letters did not flow with the narrative, which left me confused until I scanned to the bottom to discover the authors.

As an offside, the distance between the Empress and Marie did not relieve Marie of her mother's constant nagging but, at least, the author of those letters was evident.

In summary, the length of this historical fiction novel could be substantively reduced.  As mentioned above, Becoming Marie Antoinette is the first novel in the Juliet Grey's series.  Am I eager to read the next novel?  Honestly, no.