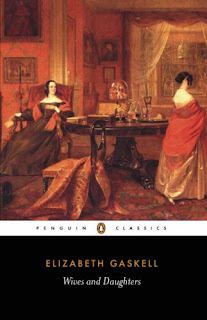 Wives and Daughters, written in serialized form by Elizabeth Gaskell in 1860's, is one of those thick books (which I absolutely love) at 650 pages.  Gaskell is touted as a contemporary of Jane Austen and Charles Dickens for sensitivity imbued in her characters and her wit.

The story takes place in 1830 and the main character is Molly Gibson, whose mother died when she was young, and is being raised by her father.   Her father remarries a rather self-serving woman and Molly suddenly has a half-sister.

Wives and Daughters follows Molly and her new sister, Cynthia, as they journey through the trials, tribulations and joys of metamorphosing into young women.

Wives and Daughters is written in true Victorian style.  Many members on goodreads gave it 5 stars. Reviews can be found here.

Tomorrow's post "X" is going to somewhat different and hopefully creative.  The English language is not exactly conducive to historical fiction novels beginning with the letter "x".  So, stay tuned....
Posted by Darlene E Williams at 10:05 AM