Karleen Koen's historical fiction novel Before Versailles A Novel of Louis XIV focuses on a mere 4 months of Louis XIV, King of France.  These four months, however, were formative years in the making of the Sun King; a dynasty unrivalled in Europe before and after his time.

Louis XIV ascended to the throne in 1643 and ruled until his death of 1715, the longest reigning monarch in European history.  Upon the death of his chief minister, Cardinal Mazarin, Louis, at the age of 22 making the shocking (to his Court anyway) announcement he was going reign as an absolute monarch.

Louis was surrounded by young men who had grown up with him.

"They were peacocks, all of them, their virility on display in a proud show of fashion and bravado.  They drank too much wine, were unfaithful whether married or not, gambled as if their pockets had no bottom, and looked for the slightest affront to their pride.....Off their leashes, they were as dangerous as wolves...". 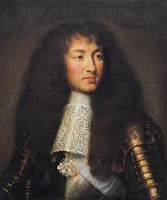 These were the courtiers who wanted a place on his council.  Louis' younger brother, Phillipe, was no exception; he, perhaps, most of all, felt he deserved a seat.  They were all destined for disappointment.  Louis would only ever trust Jean-Baptiste Colbert and Charles d'Artagnan.  The remainder he regarded with suspicion.

Louis must render powerless an ambitious scheming finance minister, without causing war, and learn some shocking truths about himself and his family.

On the romantic front, Louis, married pious Maria Teresa, a Princess of Spain, the previous year.  Louis remained faithful to her....until his heart was captured by Princess Henriette, his brother's wife and sister of King Charles II.  Their growing infatuation became evident quickly. The court was rife with rumors, gossip Phillipe could not ignore. Although prone to other preferences, Phillipe's honor was at stake. Brother opposed brother. 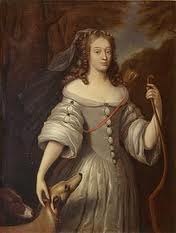 Henriette, as second lady of France, lead a frivolous life and had an avid following in stark contrast to Maria Teresa's austere lifestyle.  Into this mailstorm, Louise de la Baume le Blanc was accepted as a maid of honor to Henriette through the efforts of her cousin.  A naive 16 year-old, Louise entered an atmosphere unlike any she'd known.

Louise must grasp how to negotiate court pitfalls to avoid ruining her reputation.  The example set before her of Louis and Henriette advances her education until she realizes she is losing her heart to Louis...

Karleen Koen's lyrical style flows effortlessly throughout Before Versailles with all its conspiracies, betrayals, nuances and decadence.  I especially like Koen's closing sentences in her prologue:

"...a moment when his heart, like many a man's, yearned for something true.  It happened in his forest palace of Fontainebleau.  Perhaps it went something like this....".

Posted by Darlene E Williams at 7:13 AM