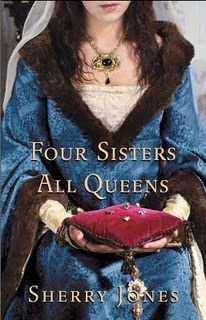 Sherry Jones's Four Sisters, All Queens historical fiction novel opens with Beatrice, Countess of Savoy, claiming:  "I, Beatrice of Savoy, am mother to four queens....Yes, I am boasting.  I began scheming for my girls before I even held my eldest...Wanting success for my girls, I taught them as though they were boys, endowing them with true power - the kind that comes from within".

With the enemy pounding at the castle gates, literally, the impoverished Countess sought to save Savoy and bring it once again into glory.  Beatrice's scheming proves successful, but at a cost to her four daughters.

Marguerite:  In 1234, Marguerite marries Louis IX of France at 12 years of age.  She quickly learns her title is just that - a title.  Hamstrung by her mother-in-law, the White Queen, Marguerite is excluded from any issue remotely related to the Kingdom of France, including her husband.  The White Queen exerts absolute power over Louis, even in the marital bed.  It will be many years until Marguerite exerts power as Queen of France and is tested to the extreme by her fanatically religious husband.

Eleanore 1236. Eleanore marries King Henry III, "an old man".  He is 28 to her 13 years.  Eleanore faces a populace who hates her as a "foreigner", the possibility her marriage is invalid, ultimate betrayal by Simon de Montfort, estrangement from her son and a fickle husband not above banishing her. 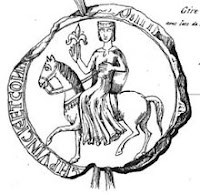 Sanchia  Her greatest desire is to be a Bride of Christ, but her mother's lofty wish is Sanchia wed Richard of Cornell, Henry III's younger brother.  Beatrice is victorious once more when the couple weds in 1243 in London, when Sanchia is 18 years old.  Sanchia is a naive child in comparison to her sisters and destined to suffer emotional cruelty at the hands of a heartless husband.  Her Queenship is fated to be shortlived.

Beatrice  The baby of the family, Beatrice marries Charles of Anjou, Louis' younger borther in 1245 at 14 years old.  Beatrice finds a kindred soul in her husband - ambition and tendency for ruthlessness. Beatrice soon learns her husband has aspirations for a crown, just not that of France.

Inevitably, the sisters are brought into conflict over wars and the County of Provence.  While two sisters attempt to maintain their loyalty to each other, another has no such compunction - or so it appears.  Sadly, a sister is abandoned to her fate.  Their mother's mantra of "family first" is one that haunts them all.

Four Sisters, All Queens is written in present tense from the viewpoints of all four sisters.  I found the present tense a little disconcerting initially, but settled in quickly.

Sherry Jones illuminates four sisters history has mostly relegated to the mists or infamy.  Her impressive insight into the vagarities of each sister as they face challenges and, occasionally, joy brings the sisters to life in a vital way. I especially enjoyed reading about the Savoy sisters, as this is a new era for me.

The lifetimes of the Savoy sisters was a complicated epoch of war, rebellions, reconciliations, betrayals, conspiracies, bravery, cruelty, misunderstandings and regrets.  Sherry Jones excels at piecing the puzzle together and pulls no punches about revealing less than favorable characteristics, along with admirable strengths. 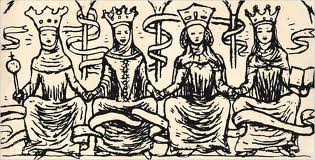 For these reasons, I am awarding of my quite rare: