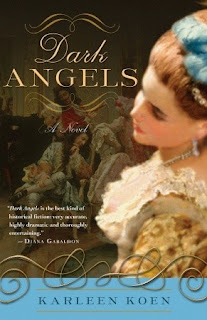 Dark Angels is a prequel to Karleen Koen's historical fiction novel Through a Glass Darkly.  It is 1670, ten years after the Restoration in England took place.

A little history revisited:  in 1649, the unthinkable happened -Charles 1 was beheaded.  His heir, Charles, Prince of Wales, drifted around Europe at the mercy of various monarchies for food and shelter.  Impoverished, Charles spent 10 years attempting to raise an army and enough money to mount an invasion of England, ruled as a republic by Oliver Cromwell.

Charles's first attempt at invasion failed. It wasn't until Cromwell died in 1659 and England began to fracture that a return to monarchy was viewed as the only hope of salvation.  Charles was invited to return, which he did in 1660.  The Restoration Settlement, however, gave Charles II notice Parliament would not be ruled by him.  For most of his reign, Charles was tied to Parliament until, in 1681, he prorogued Parliament and reigned as an absolute monarch until his death.

His first years as King of England were not easy; a war with the Dutch was unsuccessful, the plague decimated London's population in 1665 and the Great Fire of London in 1666 necessitated the rebuilding of the majority of the City. 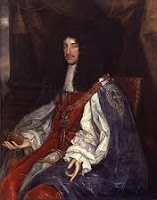 Perhaps from his youthful experiences of deprivation of even the basic necessities, Charles II was determined to live life to its fullest.  A quote from Charles II perhaps sums up his motto:  "I always admired virtue - but I could never imitate it".  This attitude bestowed upon him the moniker "The Merry Monarch", which has survived down through the centuries.

Charles II married Catherine of Braganza of Portugal in 1662.  She was unable to carry pregnancies to term, thereby leaving the succession of the crown in doubt.  The only contenders were his bastard son, Duke of Monmouth, son of his mistress Lucy Walter, and his younger brother, James, Duke of York.  Charles adamantly maintained his oldest illegitimate son would never inherit the Throne and divorcing his Queen was out of the question.

Dark Angels opens in May 1670, ten years after Charles II has been restored, and his beloved sister, Henriette, wife of Louis XIV of France's younger brother, Phillipe, arrives in England for a brief reunion with her oldest brother.  Along with Henriette, arrives Alice Verney, a maid of honor.

Alice, having left England 2 years earlier under the shadows of a scandal, is determined to once again become one of Catherine's maids of honor.  Her second goal:  marry the elderly, powerful Duke of Balmoral, ride on his coattails and exert control over Court members.

The daughter of the "wily, ambitious rogue", Sir Thomas Verney, Alice inherits many of his traits.  She is loyal to a select few, schemes to realize her dreams at the cost of others, is devious and unforgiving towards those who defy her will.  In fact, she has few redeeming qualities.

This is the beauty of the character Karleen Koen has drawn.  Alice is far from the perfect heroine and there are many reasons to dislike her, but she is most intriguing.  Koen keeps her characters true to their nature and, should there be internal reflections and transformations, she doesn't portray these evolutions instantaneously.  She draws them out over time, much the same as human nature does.

I finished this novel a few weeks ago and spend a great deal of time pondering how to write a review; not because I didn't like the novel - I just couldn't figure out how to adequately convey the mastery with which Karleen Koen blends all the above aspects into a novel (and keeps track of of it all!).  The plot never sags or becomes tiresome; there is just too much action for that to happen.

I read Through A Glass Darkly and Now Face to Face years ago and, therefore, cannot provide reviews without rereading them.  One day, I promise to do just that and review them both.